Beet for sugar production has been cultivated in Egypt for over 30 years. Since the early 1990s, BMA has played a major role in the engineering and supply of equipment to a number of sugar factories in northern Egypt. Now a new large-scale project in the region has started.

Not only heavy and nutrient-rich loess soil in moderate climates are perfect for obtaining high beet yields, but also the soils in the Nile delta. Which is why beet cultivation is a major pillar of Egypt's domestic sugar supply today. Beet is planted in the winter months to avoid the summer heat, so February marks the beginning of the harvest and the beet campaign for the mostly state-owned beet processing companies.

To start with, the factories often have to deal with unripe beets, which are very hard and brittle. As more time elapses between the best harvest time in March and the processing of the beets, their moisture content decreases. As a result, the sugar and marc concentration rise, while the purity of the extracted raw juice decreases. Factories must be flexible to respond to such fluctuations in the quality of raw materials.

Beet supplies to the factories also vary, as there are hardly any fixed supply contracts with beet farmers. When the rainy season starts in late February, the fields are submerged in fine mud, which makes the harvest more difficult and often leads to additional delays in delivery.

Al Sharkiya Sugar Manufacturing S.A.E. (ASSM) were concerned with these fluctuations in the supply with raw materials when they started a new lighthouse project in the sugar industry of the MENA region. East of the Nile delta, a state-of-theart beet sugar factory is currently under construction, with a nominal capacity of 12,000 t/d of beet. Additional raw sugar processing plants are intended to keep sugar output going in times of dwindling beet supplies. The whole plant is due to be commissioned in early 2017.

This construction project has a number of technically complex requirements that clearly set it apart from other challenging large-scale projects, particularly in terms of process efficiency. Which is why ASSM chose BMA as the principal contractor for the supply of extensive engineering work, equipment and commissioning of the main process. Local building regulations also present major challenges for the project teams, because the factory height above ground level must not exceed 22.5 m at any point. To build it according to the gravity-flow principle nevertheless, it was decided to lower the site for the main process buildings, machinery and equipment by ten metres. Large components such as the extraction tower or the falling-film evaporators can now be built to a total height of up to 32.5 m. However, the project required additional adjustments in the dimensions and arrangement of the equipment. The strike receivers, for instance, which are positioned below the batch pans, have different dimensions from the standard models: they are longer and have a smaller diameter. Planning the conveying routes between the centrifugals and the drying and cooling plants was another challenge under the circumstances. Compared to other projects, the centrifugals are positioned quite low down; the customer had specified that additional pits for elevators should be avoided at all cost. 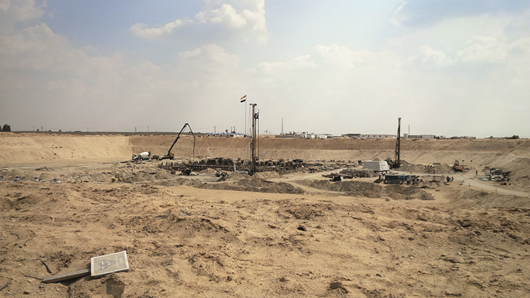 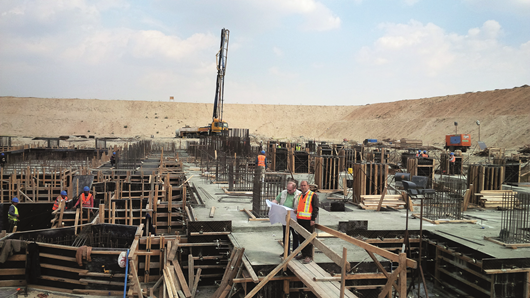 With a daily capacity of 12,000 tons, the extraction tower will be the largest of its type in Egypt. A larger extraction volume than in Europe is required simply because the sugar beets can have a marc concentration of up to 5.5 %. BMA has designed an extraction tower that takes into account these parameters. With a diameter of 13.6 m and an extraction length of 20.43 m, the required capacity can be delivered by a single unit – without exceeding the height limit mentioned earlier.

BMA has already engineered and successfully commissioned a number of sugar factories in Egypt. Outside the beet campaigns, many of them produce refined sugar from raw sugar. What makes this project different is that sugar production in refinery operation should be 2,000 t/d throughout the year and thus higher than during the campaign. One adjustment planned for refinery operation is in crystallisation, which will be designed for four refined and three C-product types. Another innovation will be the option of an efficient "hybrid mode" operation. In poor weather conditions resulting in inadequate beet supplies, it will be possible to process raw sugar as well, so the factory's full production capacities are used more evenly.

With the aim of saving on investment costs, many secondary components for the BMA equipment will be manufactured locally in Egypt. Already the Al Nouran project is promising to become a success story. With the utmost in technical and financial expertise and cultural awareness, this is yet another perfect example of partnership and collaboration between BMA and a sugar producer from the MENA region. Once manufacture is complete, the first components will be Thoralf shipped from Braunschweig to Egypt in the second quarter of 2016. Assembly on site will take place in the third quarter, in the presence of BMA site supervisors. Commissioning will be in two stages. The beet plant will be first, by February 2017, with the refinery campaign due to start in autumn of the same year.