Optimisation in the sugar house

Traditionally, the centrifugal station in a sugar factory comprises several centrifugals for the solid / liquid separation of mass­ecuite into syrup and crystals. Because separation is a cyclical process, the energy demand varies considerably between acceleration and deceleration. Which is why a higher-level sequential control system can ensure that only a defined number of centrifugals accelerate or decelerate at the same time.

Today, optimising the operation of batch vacuum pans and centrifugals in the sugar house through use of a control system in such a way that batch-type operation is transformed into an almost continuous process with minimal variation and avoiding load peaks is therefore a major customer requirement.

BMA Automation has developed smart.sequencing for complete centri­­f­u­­gal stations, a smart operation control system for sequenced batch centrifugals. This highly innovative product has been ­successfully tested and is now ­established on the­ market.

In both modes of operation, smart.sequencing considerably reduces the operator’s workload.

A state-of-the-art centrifugal currently has its own control system including an­ opera­tor panel for operation control, combined with wired interlocking, which permits operation of the whole centri­fugal station and optimisation of sugar production. If there is a sufficiently large time window between batch cycles, such an interlocking solution works very well. If, however, a group consists of many centrifugals and the desired gap between cycles is thus considerably reduced for each machine, interlocking solutions quickly reach their limits; load peaks or longer operating times are the result.

smart.sequencing, by contrast, is an advanced control solution based on a PLC architecture, offering connectivity with all DCS systems and a versatile ­control software that meets all the typical requirements of a centrifugal station. Centrifugals from other manufacturers can also be integrated with the BMA ­control system solution.

This article discusses the different criteria that a centrifugal station control system has to meet, and compares a traditional wired interlocking solution with
smart.sequencing.

Traditional centrifugal control systems assign individual centrifugals to specific centrifugal groups, based on changes in output demand. The effect in a wired interlocking architecture is that the complexity of the wiring system increases along with the number of centrifugals in a group. In addition, changes in the group configuration require manual changes on the centrifugal to be reassigned. Creating new configurations using the existing ­wiring infrastructure is not possible in such a case.

In smart.sequencing, by contrast, centri­fugals can be flexibly assigned to one group or another, depending on that group’s specific production requirements ­("swing machines"). The group assignment­ and the sequence within the group can be stored via the recipe administration and recalled anytime. This is simply made via the smart.sequencing operator panel; no adjustments need to be made directly at the machine. Machines are assigned to a different group via the software, using a standard industrial interface (Profibus, Profinet or Ethernet). The automated start-up of a machine in a different group takes just a few seconds.

2. smart.sequencing for a reduced workload

Traditional interlocking requires human supervision of each machine in a system,­ depending on the sequence in the group. Changes to the configuration or the priority of a machine have to be made manually. This can take so much time that a centrifugal station has to be staffed by several employees. And the high level of complexity of the interlocking can easily result in configuration errors, frequently leading to production losses.

The use of smart.sequencing can considerably reduce the workload of a centri­fugal station operator. A single employee can operate the whole station (up to 24 machines), making changes via the smart.sequencing operator panel without having to locally reconfigure machines. The use of industrial bus systems (Profibus, Profinet, Ethernet) enables communication with the distributed control system (DCS), so smart.sequencing can help, for instance, manage warning ­signals directly in the DCS.

One problem with traditional centrifugal control systems is that several machines discharge the separated crystals simultaneously, placing a high mechanical load on the downstream conveying elements, which therefore suffer early wear and tear.

One key objective in programming the sequencing of centrifugal stations is to prevent this. smart.sequencing optimises the centrifugals’ operating parameters to achieve the optimum performance. This is possible as long as there is communication between the smart.sequencing control system and each centrifugal’s frequency converter. Large groups of centrifugals can then be controlled perfectly and there is an even load on the different parts of the plant, which helps prevent early wear and tear of the conveying equipment.

Assuming that a typical group of four centrifugals with standard operating data and rigid wired interlocking has 24.8 load changes per hour, a single cycle would last 145 seconds.

By installing the dynamic ­smart.sequencing system, each machine’s operating cycle can be reduced by 1 second to 144 seconds. The resulting increase in output from each machine would be 4.14 cycles per day. ­Assuming that 700 kg of refined sugar are ­processed in every cycle, sugar ­production would rise by 16.57 cycles or 11.6 t of refined sugar per day. With such an increase in output from a group of ­centrifugals, the investment for smart.sequencing would pay off after just a few months.

During acceleration, a centrifugal can convert relatively little electrical power to a large amount of kinetic energy. During deceleration, the inverse is the case. The stored kinetic energy of a centrifugal basket rotating at a high speed can be converted to electric energy, with some losses. In conventional systems, this operating behaviour results in extreme negative and positive load peaks, which the power supply of a factory has to compensate. It places a considerable load on the process chain within the complete system.

The process optimisation approach of smart.sequencing, however, is different in that electric energy is made available to a group of centrifugals in the form of “stored” kinetic energy, which is controlled and regulated in a smart system. The factory’s power grid will then have a considerably lighter load, as the centrifugal groups or centrifugals are locked to prevent simultaneous acceleration or deceleration. Consequently, when a request is sent to a centrifugal to accelerate, acceleration is postponed for a set period of time until braking energy becomes available from another machine.

The same applies, but in reverse, when a request is sent for the centrifugal to decelerate: deceleration is postponed for a set period of time until the braking energy can be used by another centrifugal.

With this smart.sequencing-based control and regulating system, load peaks in a centrifugal group can be considerably reduced or even prevented altogether, while the factory can enjoy financial benefits regarding power sourcing. 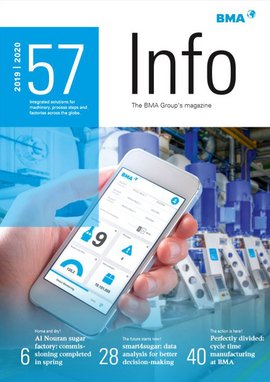