For BMA Brazil, 2017 was again filled with a range of activities relating to centrifugal production.

Much has happened since we started selling centrifugals built in Brazil directly on the Brazilian market in 2016. Production output has increased. Last year, the first latest-generation centrifugals assembled locally shipped from our Indaiatuba workshop in Brazil and were commissioned. In total, we delivered four E1810-series batch centrifugals and one K3300 continuous centrifugal to customers.

The machines are assembled at Indaiatuba from key components manufactured by BMA AG, and these kits are then completed with different assemblies and components made by BMA Brazil. This allows us, firstly, to deliver centrifugals of the expected BMA quality, and, secondly, to enable local value creation in Brazil – a win-win situation for all sides, which, in addition, is eligible for state funding. The motors and frequency converters for batch centrifugal drives, for instance, are supplied by a well-known manufacturer headquartered in Brazil.

With the increase in output, BMA Brazil has also been able to further improve its assembly processes. That has included introduction of factory acceptance tests (FAT) before shipping, which permit smooth commissioning. These FAT are based on our own strict testing standards.

Given the existing manufacturing capacities at Indaiatuba today and an optimistic assessment of the market situation, we have decided to set up a parts warehouse, to serve Brazil and many other regions of South America (Mercosur states).

In addition to centrifugal production, the development of the engineering department is also making good progress. As part of BMA’s Engineering Network, BMA Brazil carries out reviews to analyse and
assess existing sugar mills in sugar cane-producing countries. They aim to identify options for improvement, from the reception of raw material to sugar drying, and make recommendations for their implementation. 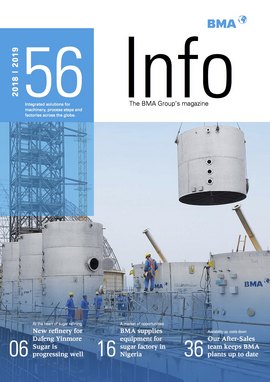