With the supply of the process control system including all key electrical equipment, BMA Automation was involved in the design of the new refinery in Iraq right from the start. The complex factory acceptance test was a major milestone on the path to the finished plant. 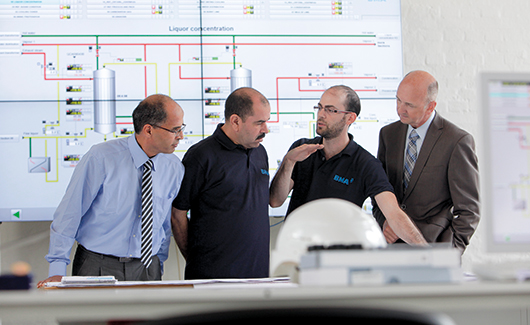 Process optimisation in Germany on a full-scale model

Carrying out a virtual factory acceptance test (FAT) is never an easy task. It involves recreating the process control system of a planned factory in a test environment, and simulating process flows in order to enhance the interaction of all components. What this means: the complete original software and all switchgear, such as PLC, IPC, and bus systems, are set up and connected as intended for use later in the factory. The system is then linked to a special version of the powerful SIMIT software, which simulates the operation of machinery and process steps.

The aim is to optimise configuration of the process control system before installation, and to identify and rectify any problems. The control software is customised to individual specifications and all components are matched. Although a typical FAT can not virtually test or anticipate every possible case, operational availability of the system during such a test is at about 60 %. That means that only the remaining 40 % need to be optimised after installation, which keeps costs low and saves considerable time during commissioning.

However, this largest private investment in Iraq was anything but typical – not least because of the unstable security situation. To ensure commissioning could proceed as smoothly as possible and the stay of BMA employees on site reduced to a minimum, the FAT had special priority.

A complete control station for the virtual test run

To test for compliance with all specifications and properties, a complete control station was set up at BMA Automation in August 2014, which was the same as the planned unit in Iraq down to almost the last detail. Eight control units, four servers, ten clients, one Engineering Station, one Process Historian and one Maintenance Station were connected with 25 I/O cubicles. The control software used was SIMATIC PCS7.

In an extensive test phase, BMA MENA‘s process engineers assigned to the project were able to verify the functionality of all components. Control loops, sequences, process flows, visualisation and all types of malfunction could be immediately discussed, modified and tested again as required.

These efforts paid off. Instead of an ordinary operational availability of 60 %, an unprecedented 90 % were achieved in the virtual environment. A new record, even for the experienced specialists from BMA Automation.