More revenue thanks to co-generation 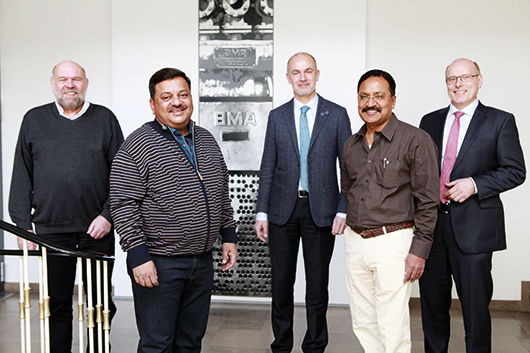 Energy efficiency that has paid off

Following an energy study and the detailed planning, a 5-effect evaporator station from BMA was commissioned at the Uttur cane sugar factory in 2012. That was the first step. Next, in 2013 and 2014, the evaporator station was expanded and the sugar house upgraded. In the last step to date, a vertical vacuum pan (VKT) for A-product sugar of “Plantation White“ quality and a plant for seed massecuite production through cooling were built. These will be commissioned during the 2015 campaign, improving operations even further.

But the focus is still on efficiency: as well as increasing the daily cane processing rate, the factory now needs considerably smaller volumes of bagasse during the campaign, thanks to the energetically favourable factory concept that relies on BMA equipment. This bagasse can be used outside campaign periods for the generation of power, which is fed into the local grid. Selling electricity is a lucrative sideline, which has quickly paid for the new evaporator station.

To increase the sugar output further while also generating more power, a new VKT was installed in 2014. Using a 4-chamber system and starting off with seed massecuite, A-product sugar is crystallised continuously, keeping steam consumption at a much more even level. As a result, far less than 30 % of steam on cane are required for sugar production. That is achieved with the consistent exploitation of small temperature differences between the heating steam and the vapour, both in the multi-effect evaporator station and in the vacuum pans.

Personal contacts for all issues

From design to planning and installation and to commissioning, BMA has assisted with all necessary tasks. These have included, in particular, detailed technical discussions with all parties involved. To ensure that ICPL has competent and experienced support at their side throughout the projects, highly skilled engineers have monitored the progress, sometimes on site, and have been available for questions at all times.

This is a level of customer focus that is very much appreciated, not least by the owner of ICPL, Mr Mallikarjun. The intensive customer care and personal relationship have helped both sides in implementing these long-term projects.